Reddit user [SDR_LumberJack] writes how he was recently featured in his local newspaper [Part2] in Ontario, Canada thanks to his efforts in helping to hunt down the cause of an RF deadspot with an SDR. He began his journey by reading a story in his local newspaper called the [Windsor Star]. The story was about locals having found a ‘dead-spot’ for car key-fobs. In the dead-spot key-less cars wouldn’t start, key-fobs wouldn’t unlock cars, and alarms would go off.

Being intrigued by the story [SDR_LumberJack] investigated by driving around with an RTL-SDR, HackRF and a laptop running SDR#. Eventually he found that there was what appeared to be a WBFM Broadcast radio station interfering at 315 MHz. This frequency happens to fall into the ISM radio band that used by car remotes and key-fobs. The exact source of the interference hasn’t been nailed down just yet though.

While it’s possible a broadcast station is at fault it is also possible that his SDR was just overloading, causing broadcast FM imaging. Perhaps a WBFM filter could be used to prevent signal imaging that could interfere with the investigation.

Hopefully [SDR_LumberJack] will continue his investigation and we’ll get an update on this story.

If you’re interested, back in 2016 we posted a very similar story about the exact same thing happening at a car park in Brisbane, Australia. The conclusion to that story was that the dead-spot only occurred in particular locations in the car park, and this was due to the shape of surrounding building causing the RF signals to reflect off the walls and distort the signal. 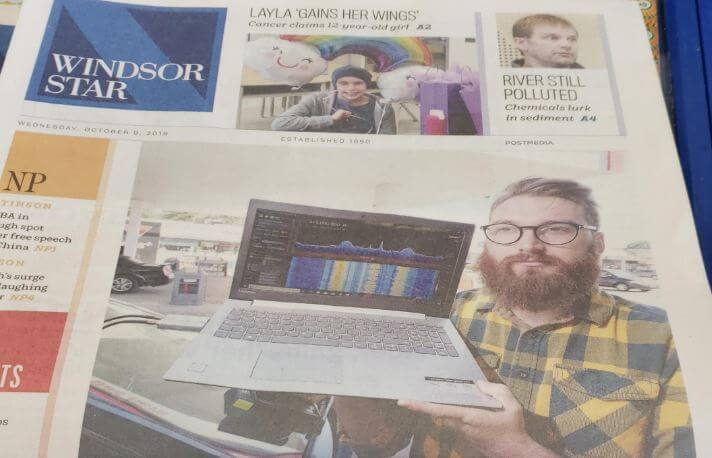 SDR_LumberJack in the local newspaper