The KerberosSDR is our 4-channel phase coherent capable RTL-SDR unit that we previously crowdfunded back in 2018.  With a 4-channel phase coherent RTL-SDR interesting applications like radio direction finding, passive radar and beam forming become possible. KerberosSDR is currently available from the Othernet store and Hacker Warehouse for US$149.95. Although the KerberosSDR was mostly created to help unlock projects requiring phase coherency, we've had interest from multiple users asking for information on how to use the KerberosSDR as a tool for monitoring multiple separate signals at once. Doing this is actually very simple. If you ignore the extra circuitry to make the KerberosSDR phase coherent, the KerberosSDR is at it's core just 4 separate RTL-SDR dongles connected to a quality USB hub. So if you're not using our coherent demo software, then plugging a KerberosSDR into a PC or single board PC will result in four RTL-SDR dongles that can be accessed individually. The tutorial below could also be done with four individual RTL-SDR dongles, but you would also want to have a reliable powered USB hub. Example Aviation Radio Monitor Below we show an example tutorial of how the KerberosSDR could be used as a 4-channel aviation monitor for monitoring air traffic control, ADS-B, ACARS and VDL2 simultaneously on a single Raspberry Pi 3B+. The video below shows a demo. KerberosSDR Monitoring Air Traffic Control Voice, ADS-B, ACARS & VDL2 on a Raspberry Pi 3 B+ The first step is to simply burn the latest Raspbian Buster to an SD Card, and set up your WiFi wpa_supplicant file as you would on any standard Raspbian install. Also add a blank file called "SSH" or "SSH.txt" to the boot directly to enable an SSH connection. Alternatively you could set this up with a monitor. We used Raspbian Buster Lite, as we are not intending to use the desktop GUI. Next use PuTTY or your preferred terminal software to connect to your Raspberry Pi via SSH. You may need to use your routers config software/page to find the IP address of the Raspberry Pi. The default SSH port is 22. Finally, update the repos on your install before continuing with the software installation process. sudo apt update sudo apt install librtlsdr-dev rtl-sdr KerberosSDR Hardware Setup Here we connected a single quarterwave ground plane antenna tuned to the airband frequencies to three input ports on the KerberosSDR via a cheap RF TV splitter. The fourth antenna input was to a RadarBox ADS-B antenna. The KerberosSDR and Raspberry Pi are powered via two official Raspberry Pi 5V plug packs, and the KerberosSDR is connected to the Pi via a single short high quality USB cable. 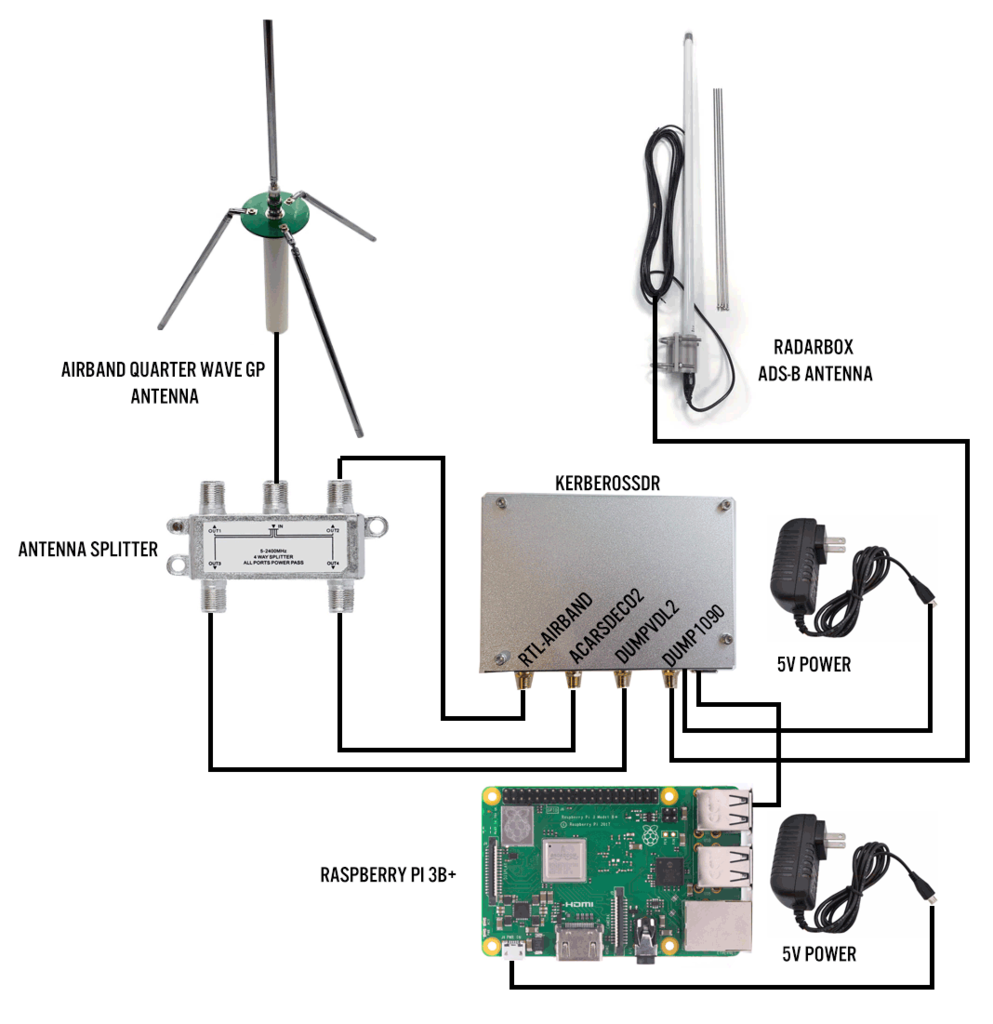