Of all the horrors visited upon a warrior, being captured by the enemy might count as the worst. With death in combat, the suffering is over, but with internment in a POW camp, untold agonies may await. Tales of torture, starvation, enslavement and indoctrination attend the history of every nation’s prison camps to some degree, even in the recent past with the supposedly civilizing influence of the Hague and Geneva Conventions. But even the most humanely treated POWs universally suffer from one thing: lack of information. To not know how the war is progressing in your absence is a form of torture in itself, and POWs do whatever they can to get information. Starting in World War II, imprisoned soldiers and sailors familiar with the new field of electronics began using whatever materials they could scrounge and the abundance of time available to them to hack together solutions to the fundamental question, “How goes the war?” This is the story of the life-saving radios some POWs managed to hack together under seemingly impossible conditions. No Atheists in a Foxhole Many POW radios are extensions of foxhole radios, a common pastime of soldiers in WWII. A resourceful soldier living in the field could likely have scrounged or looted a complete radio, or at least could have rounded up the parts to make a decent regenerative receiver for news and entertainment in the field. But the local oscillator of even such a modest receiver could be detected by the enemy, so crystal radios were preferred. With nothing but a tuned circuit and rectifier cobbled from a safety-pin and a razor blade, crystal foxhole radios were undetectable and could be used to tune in commercial broadcasts and military transmissions. 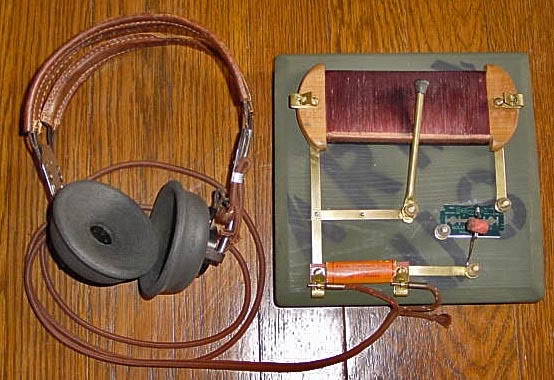 A replica foxhole crystal set. Photo credit: J.G. Jackson Foxhole radios would be easy to replicate in the POW camps, and to some degree might operate better than they would in the field. POWs often used the long runs of barbed wire in the camp fences as antennas, and the waste produced by the camp led to ample opportunity to scrounge parts. With that in mind, many of the POW hackers looked for ways to improve their foxhole radios. The most obvious improvement was adding a capacitor to the coil to create a proper LC circuit, rather than depending on the stray capacitance of the antenna. Scoring a variable capacitor to tune the radio was an even bigger coup. Life or Death Hacking A step up from the foxhole-style crystal set was a simple regenerative receiver. The richer scrounging and greater likelihood of finding mains or battery power in the POW camp led to these receivers, grouped under the general heading of canteen radios from one common way of concealing them. One especially well-documented build was that of an American amateur radio operator named Captain Russell Hutchison. He built a fairly complex single tube regenerative receiver into a standard GI canteen while interned by the Japanese in the Cabanutuan concentration camp in the Philippines. 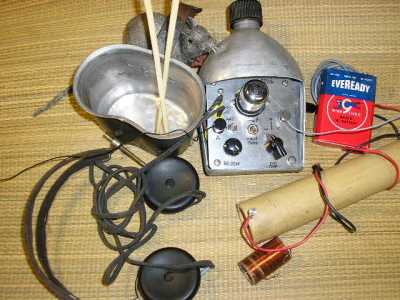 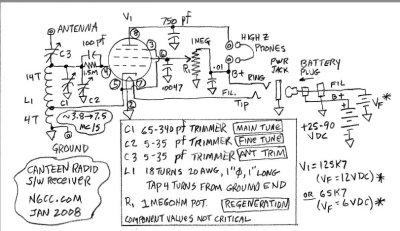 Hutchison had the relative good fortune to be tapped as the fix-it guy for the camp; even the Japanese relied on him to repair their gear. Radios looted by Japanese soldiers made it to Hutchison for repair, and pilfered parts began to accumulate. Eventually Capt. Hutchison had enough parts to build his radio, which was sensitive enough to copy shortwave transmissions from as far away as San Francisco using a covert antenna of fine wire woven into a clothesline. Hutchison’s radio was a matter of life and death in more than one way. The most pressing concern was being discovered with the set, which would result in summary execution. To avoid that fate, Hutchison took elaborate measures beyond the canteen subterfuge to ensure that as few men in the camp as possible knew about his hack. Despite several near-misses, the radio was never discovered and Hutchison eventually made it out of the camp alive. But the radio served another life and death role. Far from being just an amusement to pass idle hours, the radio was used to monitor the progress of the expected invasion of Japan. The POWs realistically feared their captors would execute them and destroy the evidence of their atrocities as soon as Allied boots hit the Japanese Home Islands; the radio kept the POWs one step ahead so that they could try to escape before the bullets started flying. Something from Nothing As impressive as Hutchison’s hack was, at least he had manufactured components to work with. There were other POW hackers that weren’t so fortunate, but still needed the connection to the outside world that radio provided. With the same mortal stakes at play, these hackers built radios from almost nothing. Take the case of one Lt. Colonel R.G. Wells, a British officer interned in a Japanese concentration camp in Borneo. In 1942, he created almost every component of a superheterodyne receiver from found objects. Capacitors were made from the foil lining of a tea chest and the few precious scraps of newspaper that weren’t horded for alternate duty in the latrines. Resistors were pieces of string impregnated with burnt cinnamon bark. Bare wire was insulated by rubbing flour nicked from the mess into palm oil and caking it onto the wire. A chromic acid wet cell was concocted of potassium dichromate “donated” by the camp pharmacy and zinc trouser fly buttons. When that proved insufficient to power the radio, Wells built a chemical cell that both rectified the camp’s AC supply and dropped the voltage to a usable level. 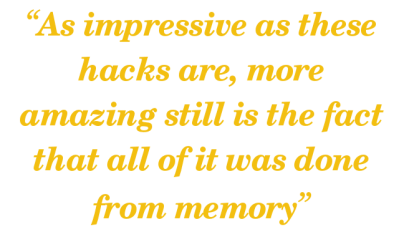 The only components Wells couldn’t conjure out of thin air were the vacuum tube and the headset. Wells’ detailed oral history of the radio doesn’t say much about where the tube came from, but it does record that the headset was smuggled into the camp. Given enough time, the resourceful Col. Wells no doubt could have manufactured a headset; indeed, a Vietnam POW named Richard Lucas built the headset for his foxhole radio using a core of nails wrapped with wax-insulated wire in a bamboo resonator with a tin can lid for a diaphragm. He reported that it worked well enough to hear several stations, but that the headset would have worked better with a magnet to bias the coil. As impressive as these hacks are, more amazing still is the fact that all of it was done from memory. These POWs came into camp with nothing but their dog tags and the clothes on their backs, and sometimes not even the latter. There were no reference books or cheat sheets. The circuits these men built under impossible conditions, often with only the rawest materials, were committed to memory, probably from days and nights of experiments in the pre-war years. Their hobby paid off in a big way and allowed them to hack their way through a more difficult time than any of us can likely imagine.

Return to “Radios that work for Free”