A ground penetrating radar (GPR) is a system that uses RF pulses between 10 to 2.6 GHz to image up to a few meters below the ground. A typical GPR system consists of a transmitting radio and antenna that generates the radar pulse aimed towards the ground, and a receiving radio that receives the reflected pulse. GPR is typically used for detecting buried objects, determining transitions in ground material and detecting voids and cracks. For example, in construction it can be used to determine rebar locations in concrete, and in the military it can be used to detect non-metallic landmines and hidden underground areas.  These GPR devices are usually very expensive, however researchers Jacek JENDO & Mateusz PASTERNAK from the Faculty of Electronics, Military University of Technology, Poland have released a paper detailing how two low cost HackRF software defined radios can be used to create a simple GPR. Their system uses a step-frequency continuous waveform (SFCW) signal which scans over multiple frequencies over time, and  the software was written in GNU Radio. In their tests they were able to detect a dry block of sand buried 6 cm below the ground, and a wet block 20 cm below. 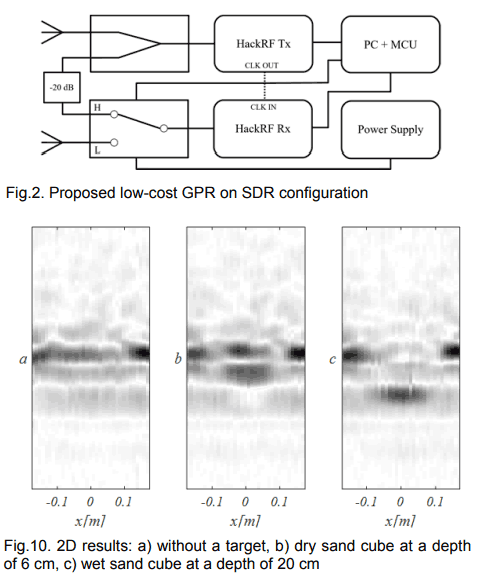